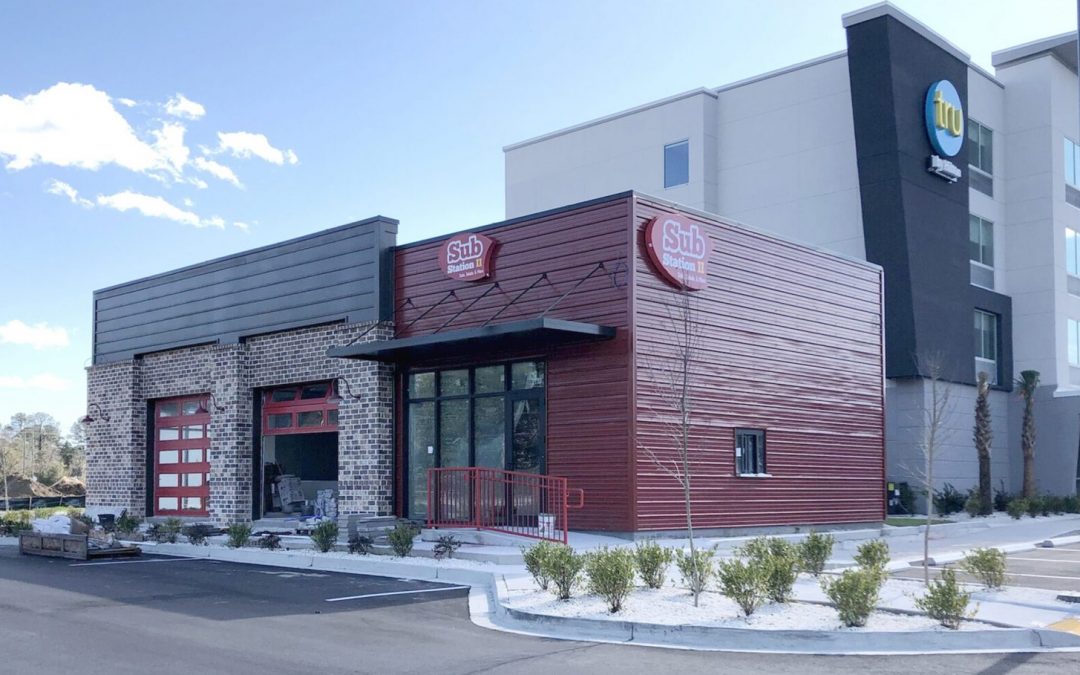 Back in 1976, it was uncommon to see hoagies, gyros, and other “sub” sandwich shops in the South. They were mostly limited to the Northeast. When Dominic Ruffalo opened his first sandwich chain in Sumter, S.C. that year, he set out to break that trend. He opened his own sub shop, called Substation. When the second one opened in Charleston, he called it Substation II, and now the franchise has over 40 locations nationwide. 28 are in South Carolina alone.

One of those 28 South Carolina locations is in Beaufort, located off of Highway 170. In 2018, the franchise planned to move just over a mile up the road to a brand new building on Highway 21. 29E6 was consulted for full structural design, and the designer on the job was SM7 Design. The two companies collaborated with a design charrette, and this was among the first instances that led to its incorporation into the 29E6-Step Process. Regarding Substation, the designer David says, “On the Sub Station II building, we wanted to create a modern vernacular that was both functional and aesthetically pleasing for our client, while responding to the interior and exterior site conditions via maximizing the glazing areas.”

At the site’s foundation, one of the structural cdesign considerations was the potential for soil liquefaction, which was determined through a geotechnical report done on the site. Given the nature of the project, this was structurally mitigated through stiffening the slab. Above the foundation, the architectural design is for a single story fast-casual restaurant with ample dining space. The profile changes in the walls create an asymmetric appearance, and windows along the front of the restaurant provide a modern look.

Structurally, adding windows increased the design wind pressures of the building. The wall profile changes were handled with a simple framing system. The restaurant is framed with wood studs and trusses, and the lateral system uses wood shearwalls with tie downs in order to resist 139 mph winds. The architect also implemented strategically placed louvre-like screening on the roof area to help camouflage mechanical equipment from the road. The ability to build the restaurant with wood shearwalls was a mutually beneficial, cost-saving decision made possible by collaboration of 29E6 and SM7 on the design charrette. In order to use wood shearwalls, the ratio of wall height to width in the design had to be 2:1 due to seismic requirements. Without the charrette, it was far less likely that the ratio would have been met in the architect’s design, meaning the structural design would have used steel frames – a far more costly alternative.

Given the cost that steel would add to a project, plans for a steel frame design would have been returned for value engineering revision, which would have added significant time to the design process. Instead, the charrette enabled all parties to streamline the design process by developing a design that worked around this foreseeable issue in the first place.

At the project’s start in late 2018, this was one of the earliest uses of the design charrette at 29E6. Since then, however, it has become an integral part of the company’s process, and its core purpose has remained the same: to collaborate with architects and give intentional forethought to issues that would be impediments in the design process. By doing so, architects can focus more on the challenges of their own work, designs are finished more quickly, and money is saved for all parties involved.

Construction recently started on the new Substation II location. The new restaurant is a part of a larger development containing two hotels, Home2 and Tru by Hilton, both of which 29E6 also worked on. Substation II is set to finish in the spring of 2021.