“Cracking” the Case of Structural Cracking 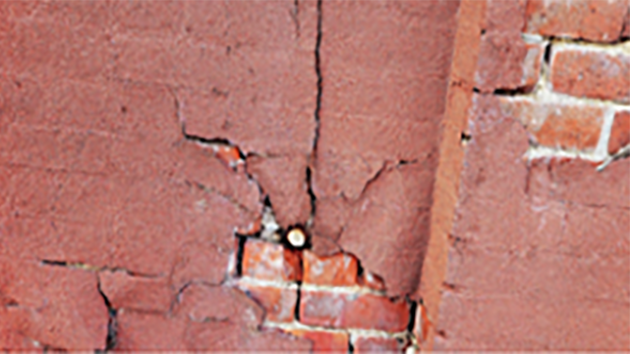 It has been said that it is not a matter of if, but when, as it relates to concrete cracking. I suppose this truth also applies to brick, stucco, drywall, as well as a number of other brittle materials. So the ultimate question is, when is it a cause of concern? That is, how do you know when it is purely aesthetic, and when it is “structural” in nature. The short answer, as with many things in the engineering world, is that it depends. This article will explore a few factors as to how to determine if a crack is “structural,” and also will provide a few case examples.

The first thing we would evaluate is the location of the crack. Is the crack a part of a structural member, or is it indirectly supported by a structural member? For example, if a crack is in a veneer or slab on grade, then it is not supporting the structure, per se. But- if these cracks have a significant magnitude, then it may point to a larger problem that is substantially structural in nature.

What are some causes of cracking?

Many cracks are caused by soil settlement. Over time, the weight of the building compresses the underlying soil and causes movement. This movement can lead to cracking. The location and material that cracks appear in helps us determine whether the cracking is structural or merely aesthetic. The larger or more numerous the cracks are, the more likely it is that they are telling you something may be structurally damaged. Non-structural cracks usually occur in finishes, such as brick veneer, sheetrock, or siding. They can occur as materials age and withstand changing weather patterns over time- going through a series of expansion and contraction cycles. The name can be deceiving, however- non-structural cracks can still bear consequences for the structure, particularly as they get larger. Larger cracks risk water seeping in over time, and for a building framed with wood, this can cause significant damage through rotting. It can be difficult to distinguish between structural damage and aesthetic damage. So how do we determine which kind of cracking it is? The cracks in the building can often tell a story and point us to the root cause of the issue. Let’s learn how to “crack” the case, by taking a look at some recent examples of structural cracking here in the Lowcountry of South Carolina.

A good example of a brick building that has structural cracking in it is the historical Fordham building, which is located downtown Beaufort, SC. This type of cracking is a very common case. It is caused by the brick being brittle and the soil moving. In some cases, it is caused by the brick either settling or expanding. Brick is very rigid and is forgiving to movement. Often, the foundations on brick buildings are just not sufficient- especially in much older buildings like Fordham. In this project, it was determined that the structural cracking was due to one of the typical culprits- thermal movement or foundation settlement, but it was determined to be not significant enough to cause immediate concern or require mitigation. 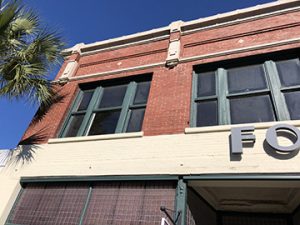 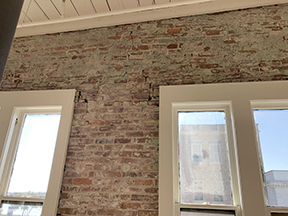 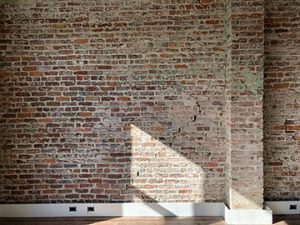 Another property that sustained structural cracking locally was a house on Brays Island, South Carolina. The cracking on this property is a good example of cracking due to inadequate lumber framing – which, surprisingly, was actually due to a common issue that we come across. That is to say, the cracking is not always due to settlement. with framing. Due to framing issues, the lumber bends, and the walls end up cracking.There was also a good amount of cracking that was simply aesthetic. There was also an issue with a lack of control joints in one area, causing severe cracking in the floors. Concrete walls and slabs, brick walls, and even sheetrock walls can be prone to cracking caused by movement, because of temperature and shrinkage of materials. 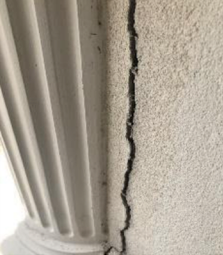 Let’s now look at a couple of less common examples of cracking. In October 2016, a house on Harbor Island, SC sustained structural damage. Its proximity to the ocean caused shifting in the structure, and shortly after Hurricane Matthew rolled through, ample cracking was visible throughout the house, mostly in walls and ceilings. In this case, the movement of the 2×4 walls was too much for the drywall to sustain, and hence cracked. According to the records provided to us, the cracks were not present before the hurricane, but only occured afterward. Another unique case of cracking is a house in Hilton Head Island, SC. The house was protected by a seawall that failed after enduring several hurricanes over the years. Due to the soil being undermined, the structure sustained large cracks on an external wall. In this case, the movement was stabilized at the seawall, and this crack was deemed to be a result of the seawall failure. Because of the stabilization, the damage shown in the photograph is therefore no longer of structural concern.

While these are somewhat interesting examples, we come across a lot of examples where the issues are not a concern. One of the most common areas is the slab on grade. If you have a slab on grade, and the crack is about the thickness of a credit card, then you are likely to be in the clear. If you are not sure, give an engineer a shout, and I am sure they can help you determine where you stand.

As you can see, structural cracking is a very common phenomenon. Figuring out whether the cracking is structural or only aesthetic can be difficult. The larger or more numerous the cracks, the more they may indicate structural damage. The local examples provided all indicated various types of cracking.