E is for Earthquake: A Briefing Regarding Seismicity and Liquefaction in the Lowcountry – the Tru Hotel 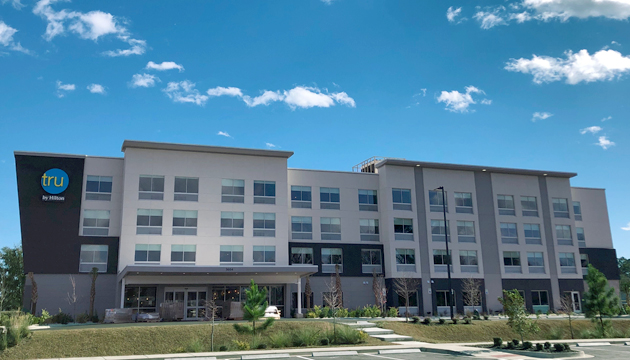 Background: Tru by Hilton is a new hotel off of US Highway 21 in Beaufort. Tru has 4 stories, 92 rooms, and the building is a total of 38,000 square feet. It is part of a larger development, which already includes a Home2 Suites by Hilton Hotel, that opened in late 2019. 29E6 was consulted for structural design services on both hotels, as well as the restaurant Substation II, which has nearly completed construction in the development. The owner of Tru also owns its nearby neighbors, Substation II and Home2. Substation and Tru were strategically given similar design styles so that during the construction phase, contractors were able to switch from one project to another without a significant change in their methodology. Tru and Home 2 are both hotels by Hilton and differ slightly in their target audience and motif. The Home 2 features a more classical style and colorful spacious rooms, while Tru targets a younger audience. Its design reflects that in a more modernly minimalist, with a bright white, clean-cut style that appeals to the preferences of the younger generation. In preparing for the build, the Tru Hotel came with its own set of challenges, in the form of liquefaction, seismic factors, as well as financial considerations to be made. 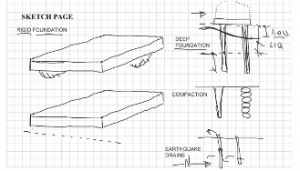 Preparing the Design: At the beginning of the project, it was noted in the geotechnical report that the site was prone to an issue known as liquefaction, which was not a surprising factor for the Lowcountry where TRU was built. Addressing the liquefaction was the first order of business. Liquefaction is not a new concept for the 29E6 team. This is a factor that has been dealt with on numerous structures. Of course, on each project, the location and design differ, and even within the same city, there will inevitably be varying levels of liquefaction. This means that with each build, there are a few options available for mitigating the concerns of liquefaction, and the team had to choose the best course of action.

The team decided that the best course of action was structural mitigation. Mitigation techniques that are considered include modifying the soils to eliminate pore pressure or increase density through earthquake drains, installing a deep foundation such as using piles to extend the bearing below the liquefiable layer, and finally, designing the structure and foundation to tolerate the liquefaction. A diagram showing these techniques is shown in the figure provided. Each option was considered to account for the associated risk and cost. In the end, given the relatively mild amount of liquefaction, it was decided to proceed through structural mitigation. The Tru hotel’s foundation is designed specifically to account for potential soil liquefaction. This is done through the use of a grade-beam system, where loads are transmitted from bearing walls to spaced footings through a concrete beam, installed at a depth below the liquefiable layer to ensure solidity. The grade beams are approximately 24 inches deep, and 36-60 inches wide. The process was done as efficiently as possible, with the concrete for the foundation being placed monolithically, which sped up the process of laying the foundation. This provided a cost advantage over installing piles or earthquake drains that would have required more steps and time. To ensure the adequacy of the installation, special inspections, and structural observation according to chapter 17 of the Building code were followed.

Soil Liquefaction
Soil liquefaction is the loss of soil strength that occurs when there is a combination of high seismicity, a high groundwater table, and less dense soil.

Describing the system: The structure is primarily constructed of wood framing. That is, the walls and floors are wood framed. Interior bearing walls were used for load transfer to the foundation. For the lobby level, the rooms over the large spans were supported with a steel beam and column system. The lateral system, a critical structural design element in the Lowcountry, is designed by necessity to resist 139 mph winds. That is a typical standard for Beaufort because of its location being prone to hurricanes and earthquakes. The lateral system used primarily wood shearwalls to resist wind and seismic forces. Other aspects of the building included the floor and roof framing. Open-web floor and roof trusses were used to assist in accommodating utilities, such as running plumbing and HVAC through the floor system. Wood framing was used due to the cost at the time of construction, although a nominal amount of steel was used at the lobby level, and exterior elements, including the signage feature support as well as the porte cochere elements. Incorporating steel into these elements was key to providing the modern style that TRU offers.

All in all, the TRU Hotel came with its own set of structural challenges and unique characteristics and is a valuable addition to the lovely Lowcountry.